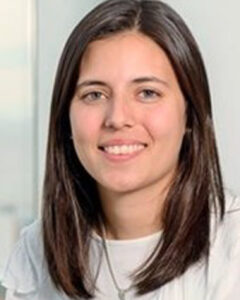 Valentina has a bachelor in International Relations and completed a year of her studies in Ireland, focusing primarily on international development.

From a young age she volunteered with local organisations and NGOs working in poverty reduction and advocating for the prevention of violence against children and teenagers.

She worked at the Inter-American Institute of Human Rights and also spent three years as a teacher for a local high school.

Before joining KCS, Valentina worked in the Defence Section of the British Embassy in Montevideo. In her role as Deputy Coordinator she supported  the development of a National Child Safeguarding Policy for Peacekeeping Missions in coordination with the Ministry of Defence, UNICEF and KCS. She managed the continuous training provided to the Uruguayan Armed Forces in Human Security in Military Operations, which included organising a regional course for participants of seven countries, and she supported the development of the National Action Plan of the UN Security Council Resolution 1325 Women, Peace and Security.

Child safeguarding professionals from around the world receive our newsletter. Stay updated about our conferences, workshops and special announcements.

We use Mailchimp to keep you up-to-date. By clicking above to subscribe, you acknowledge that your information will be transferred to Mailchimp for processing. Learn more about Mailchimp's privacy practices here.